↓
Home Menu ↓
Skip to primary content
Skip to secondary content
Home→essays→Comparison of Two Portraits: One Neoclassical and One Post-Impressionist

While passing through Philadelphia between the Thanksgiving and Christmas holidays, I took the opportunity to visit the Philadelphia Museum of Art. The day was beautiful, the air was cold and crisp, and the bright sun made the East entrance glow an astonishing yellow ocher – something like a pot of gold. As I entered the lobby, I could hear Christmas carols being sung from somewhere down a long corridor.

I have been focusing on painting portraits recently, and two examples in particular caught my attention on this visit to the PMA: Ingress’ “Countess of Tournon“ and Cezanne’s “Madame Cezanne”. These are painted in two distinct styles – Neoclassical and Post-Impressionist – and I bounced back and forth between the two paintings as I studied the differences between these artistic philosophies. I would argue that the portrait is not the primary focus of either movement, nor does this pair of portraits illustrate every aspect of these movements. But I find the application of these different styles to portraiture to be both intriguing and enlightening.

Jean-August-Dominique Ingres (French, 1780 – 1867) was the last notable Neoclassical painter. Neoclassical painting pays homage to ancient Greece and Rome, with their stories of heroism and virtue, as well as to the Age of Enlightenment, with a factual, rational approach to painting. It most often chooses as its motif great histories with strong moral messages. While Ingres executed such paintings, for example “Oedipus and the Sphinx”, he is more famous for the portraits that dominated his later career. No movement endures forever, and even at the height of Ingres’ fame the influence of Neoclassicism was diminishing. His rival Delacroix, with an emphasis on color and motion, was leading the more emotional Romantic movement, which would serve as an inspiration for the Impressionists and Post-Impressionists to come soon after.

When looking at the Countess, observe the formal subject matter and composition, exacting outlines, and restrained colors. The Countess is an aristocrat and, according to Enlightenment social standards, deserves to be the subject of a portrait. She is dressed appropriately in an elegant velvet dress with lacy accessories. She strikes a traditional pose in which she regards the observer directly. Ingres assumes a single point perspective, lending a static feel to the painting, and the Countess’ proportions are geometrically correct. The boundaries of the objects in the painting are carefully delineated, with truthfully rendered eyes, nose, and mouth that create the illusion of three dimensions on the two dimensional canvas. The colors of the objects are exact, and they never bleed across the boundaries. The dress is green and only green, with none of the other colors such as the blue of the cushion or the flesh tones of the Countess invading it; the skin is colored only with flesh tones; and the background is monochromatic. There are no visible brush strokes, all having been blended to invisibility. 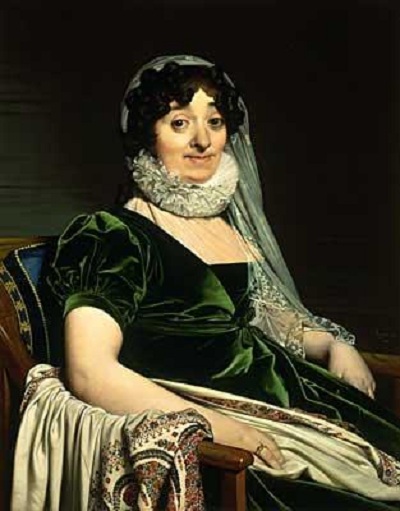 The result is a beautiful, stately depiction of a lady with rank and respect, and the viewer would easily recognize her on the street.  It is about the Countess, who has posed herself in her ideal state, happy and confident, as she would like to be remembered.  But at the same time she is guarded – her genuine thoughts cannot be interpreted.

Paul Cezanne (1839–1906) was a Post-Impressionist painter often referred to as the father of modern art. Impressionism, the progenitor of Post-Impressionism, has it’s roots in the paintings of Delacroix. It extended Romanticism’s reaction against the ideals of the Enlightenment, choosing mundane subjects, composing them naturally and informally, employing a vivid pallet, and imbuing the painting with the deep emotional experience of the artist. Post-Impressionism goes even further, decomposing the subject into more fundamental geometric forms and more arbitrary colors, as can be seen, for example, in Cezanne’s landscape “Mont Sainte-Victoire”.

When looking at Madame Cezanne, observe the mundane subject matter, casual composition, indistinct outlines, and active colors. Madame Cezanne is not a member of high society, but egalitarian Impressionism allows her to be the subject of a portrait. She is wearing a common dress with no jewelry, and her gaze drifts to nowhere as if she were caught daydreaming. Cezanne creates a dynamic albeit geometrically unfaithful portrait by combining views from many slightly varying angles. There are no exactingly drafted features; instead, patches and daubs of color are built up to form the the flattened face that makes no attempt to create the illusion of being three dimensional. The blush of Madame Cezanne’s cheeks and ruby of her lips are bold daubs of pigment, not smoothly blended, and throughout the brushwork is readily apparent. The colors commingle everywhere: the blue of her dress is in the shadows of her face, the flesh tones of her face appear in the wall behind her, and the blue-green shadows of the wall find their way into the stripes of her dress.

The result is a beautiful picture, a moody and enigmatic depiction of a woman that the viewer probably would not recognize in passing.  It is not about an iconic Madame Cezanne but about the experience of observing her in a natural and unselfconscious state.  The viewer might empathize with the unposed, somewhat forlorn expression.  Furthermore, the painting reflects the act of observation itself, with shifting perspectives and quality of light.

Having had an enjoyable and satisfying trip the the PMA, I headed back to the lobby. Along the way, in one of the galleries, was the Philadelphia Girlchoir, where they were singing the carols that I had heard upon my arrival. I listened for about twenty minutes as they finished their set, making a great finale to my visit.