On a trip to the Desert Southwest in January, I stopped by Red Rock Canyon. I had my sketch book and charcoal handy, and as the sunlight waned I whipped out a few sketches. While the “Red Rocks” are the obvious motif of this location, the terrain provides an unlimited variety of voluptuous rock formations and flora to keep an artist mesmerized indefinitely.

The painting I rendered from that visit provides a lesson in controlled exaggeration. While the scene was interesting as I looked at it, a rendition of it could easily be bland – just another rock.The task of the artist is to tease out the essence of the scene, not merely record the event. This is achieved by exaggerating the image, but the exaggeration must be uniform in terms of geometry and color.The rock face leans farther to the right than was actually true, making it almost ambulatory, and the colors are fragmented. The flat, featureless sky was bequeathed with a turbulence that matched the motion of the rock, and in it appears the dominant tans of the rocks as well as the blue-greys of the brush. The dull mass of brush that grows in the foreground was transformed into a clawing creature, in tune with the vigor of the rocks and sky. The result represents the vitality of the scene. 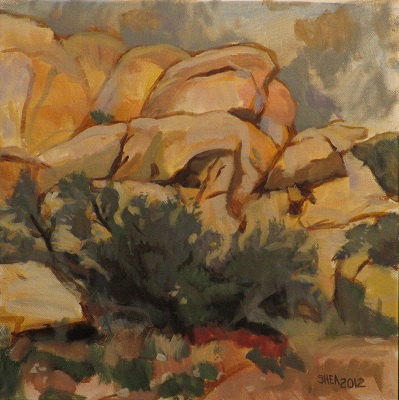